We are witnessing a change. It is a rise and acknowledgement of self. We have finally owned up to our real selves, making us a reality in the apparel industry. Been in the process of manifestation for long, now is the time it reaches not only the commercial spaces but more readily in people’s consciousness.

More and more Indian designers are on their way to start a different approach, one that is not confined in the clutches of the market economy but resides in the bigger, more mindful purpose. It is an undertaking to bring indigeneity to our clothing. In an effort to go beyond the designs, but in one’s living and working spaces, in methods of production and most importantly in the communities.

Indigeneity is inseparable from sustainability. Indigeneity aims at creating an environment that impacts and transforms lives of the marginalised neighbourhoods. Involving learning and training of being one with nature and the community, it drives us to break patterns of climatic exploitation and poverty. It is the only way to survive and perpetuate a future of inclusivity and sustainability.

On a mission to bring about much needed change to the fashion industry, entrepreneurs are adamant on putting the planet and the people first. This inclination was further pushed when we were hit by a global pandemic. Apart from putting things in perspective, it brought the essentialities upfront.

These essentialities mainly constituted taking accountability of those who work for us. Our fellow men, women and others who are under threat of losing their livelihood. While the world battled the unprecedented, Indian apparel industry resolved to take a step back and change the way they look at things.

There was no want of role models. Several labels and fashion houses stood as an inspiration for the rest. Proudly, we at MasterG had our perspective in place. We promised a shorter production cycle and offered a low minimums acceptance policy, ensuring less-wastage and ethical production. We aim to reduce the number of errors and bottlenecks that enable us to streamline our processes better. A smooth functioning even during the time of pandemic, brought to our notice it’s ever evolving model and sustainable system in place. Rooted in the purpose of handing agency and giving voice to those who might lack the equal opportunity, MasterG found itself self-sufficient in the times of crises. Training and employing skill and crafts-woman-ship from low-income backgrounds helped, kept us afloat during the serious hit.

Here are some mentions to those who are the pioneers of this rejuvenating system. It is a protest for a ‘zero’ waste industry and supports a fair-wages system.

Upasana is one such brand that believes in the transforming power of fashion. By designing projects meant to observe and serve regions and communities closely, it constructs a creative space for lost art to flourish. One such programme is Kapas, aiding the cotton farmers of Madurai. Varanasi Weavers is another of their programmes launched to support the weaving. It also offers a platform, Upasana creating a space of discourse over social issues for people from diverse fields, such as designers, farmers, social workers, environmentalists, students etc.

In a primarily agrarian country, it is significant for all industries to pay heed to the scenarios concerning our farmers. No Nasties is one such brand that functions with a conscious look at the dismal condition of our primary sector. Upholding the principles of fair wages, financial and social security and sustenance, it propagates 100% organic, 100% fair trade clothing. It is all about people for this brand, that stands somewhat alone in its fight against injustice.

It’s high time we dive into the tendency of recycling and upcycling. House of Wandering Silk promotes just that. Being international in terms of setting up studios in countries like Pakistan, Afghanistan, Laos, Cambodia, Uzbekistan which has a populace of marginalised women producers and artisans. They create extraordinary apparels, jewellery and other accessories by upcycled materials and promote handmade. What makes them stand out is the intensified research put in to find craftsmen in hidden corners of the world.

These are some of the forerunners, who brought in the innovation and thinking that was out of the box. It is time to follow the role models that brewed their own in the philosophy of the ancient. It is adaptability of the newness and incorporation of the old that makes them thrive in the work they do. Rightly so, nature gives back, with the sustenance that never leaves such initiatives in the high and dry. 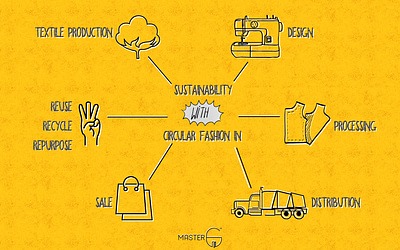 We chase efficiency in the most material sense and in this chase, we constantly ignore the processes, methods, and resources employed by us. Economy is brittle, our reserves and sources are breakable, hence the solutions need to be profound, more than the action needs to be taken now.
We need to take steps in our innumerable departments of manufacturing and consumption. Everything we do, consumes resources. Most of them are non-renewable given the idiosyncrasies of our urban living and corporate trading.
With this buzzing sense of awareness in the apparel community, two concepts found its footing in the ‘first’ world – Circular Fashion and Circular Economy.