In ancient systems, much focus was given to the circularity of life. What goes around comes around! It’s a circle of life. Duniya gol hai! is not just a statement but an idiom, explaining the functioning of the world being congruent to its shape.

It is indeed a circle of life that maintains human civilization. It often arches into chaos and abandonment, until balance is restored. But we increasingly seem to not abide by it. In the brave, new world supersedes our needs to establish control. This control which is human is a mayhem of the universe. Our goal is capitalism and is as unforgiving as humans.

We chase efficiency in the most material sense and in this chase, we constantly ignore the processes, methods, and resources employed by us. Economy is brittle, our reserves and sources are breakable, hence the solutions need to be profound, more than the action needs to be taken now.

We need to take steps in our innumerable departments of manufacturing and consumption. Everything we do, consumes resources. Most of them are non-renewable given the idiosyncrasies of our urban living and corporate trading.

With this buzzing sense of awareness in the apparel community, two concepts found its footing in the ‘first’ world – Circular Fashion and Circular Economy.

In the apparel industry, Sweden introduced a new term. Circular Fashion. Year was 2014, when Sweden brought the notion of a circular economy and other European countries quickly joined the bandwagon. It sailed into the political agendas of many summits and conferences. The impact was yet not visible, it sustained on curiosity.

Let’s first get the definition out of our way. ‘Circular fashion’ can be defined as clothes, shoes or accessories that are designed, sourced, produced and provided with the intention to be used and circulate responsibly and effectively in society for as long as possible in their most valuable form, and hereafter return safely to the biosphere when no longer of human use. (Anna Brismar, Green Strategy, 2017)

There were 16 main principles in the life cycle of circular fashion. Those consisted of an entire life-cycle of a product, from design and sourcing, to production, transportation, storage, marketing and sale, as well as the user phase and the product’s end of life. Products needed to be designed keeping in mind some of the non-negotiable aspects.

One being High longevity and biodegradability of a fabric. The Indian middle class has been going along with the thumb rule of upcycling and reusing. Be it through methods of hand-me-downs or finding different usage of the same material. The simple tradition can reduce the amount of wastage produced. 5 billion pound of textile waste was documented in a 1980s survey, the rate of waste generation reached upto 32.44 billion pound in 2014, post fast fashion trends. The research from EPA says that 95% of all textiles have the potential to be recycled and reused, of which only 15% is done.

The problem needs to be tackled from the grassroot level, that is production. Using non-toxic chemicals in the process of production and recycling can increase the rate by which fabric decomposes, which remains extensive till date for reasons varying through eras. Without employing methods of preservation, a fabric endures the test of time. Vintage and ethnic clothes are built to last and in today’s times, synthetic fabrics and use of chemicals, dyes help extend its life. The propagation of biodegradability of a fabric is the need of the hour.

The notion of surrendering back to nature, whatever saw its origin in it shouldn’t be kept afar. The practices of proper waste disposal ensuring the nutrients status of our environment is key. Those unfit for reusing and recycling, need to be composted to increase the nutrient value of the ecosystem.

The social aspect of manufacturing and usage needs to be kept in mind.

The Monster in our Closet is the increasing popularity of fast fashion which is not only exploitative of the climate but also the social fabric of the society. Along with manufacturing excessive carbon footprint, it instigates catastrophe to our social fabric. Continuous association with unethical business practices and malware in their employability system, renders the third world nation into a deeper colonial hangover.

MaserG holds on to the belief of Prashna Upanishad. You grow by questioning the world around you. It believes in starting the discourse that carries within itself the potential for the betterment of the world. In the core of its conception, MasterG questioned the exploitative Khandaani Darzi system that was in place to exclude women from learning the skill of pattern making and being able to earn their own living. It was set up to train women in and for cost-efficient, ethically managed and sustainable units of production and manufacturing which function as power-building spaces.

Realizing that fast growth and financial success does not result in social consciousness towards issues of gender parity, ethical production and raising a humane industry, MasterG chose to work social and emotional intervention of the women, making them recognize their right to choose. Objectivity of perspective and clarity of vision led towards upliftment of the communities lodged at the intersections.

Through our day-to-day action, our aim should be to become one with the harmonious cycle of nature. Nature has its way to link goodness together. Lack of socio-economic harm gets converted into no environmental damage. Contributing positively in the evolution of this dynamic organism called planet Earth, needs to be the first moral disposition of ours as humans.

We are here to talk about the largest of communities. The one which encompasses the chain of production and consumption. We all are the users of clothing and all of us are responsible for its journey from its origin to demise.

Fashion, clothing are aspects of life. The onus falls upon us to eliminate detrimental practices and stand as one with the concept. It affects each one of us and is an amalgamation of our actions as a society and individuals. Its production, deposition and disposition have everything to do with what we chose, as a wearable, and as a lifestyle. 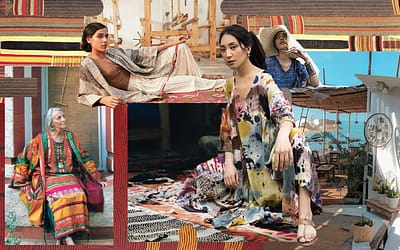 Indigeneity is inseparable from sustainability. Indigeneity aims at creating harmony with our natural surroundings. It drives us to break patterns of climatic exploitation and poverty. It is the only way to survive and perpetuate a future of inclusivity and sustainability.